A 52 Week Autobiography Through Music - Week 25 - Skeleton Crew from Pancycle on Vimeo.

Skeleton Crew, at least the version I heard live and who's first record I bought was comprised of Fred Frith, mostly known as a guitarist and Tom Cora, a Cellist. The music however was complex and much more than what one would expect from a duo with both musicians playing multiple instruments often simultaneously. This was adventurous, experimental music unlike anything I had heard before. Skeleton Crew later added Zeena Parkins and they made the album Country of Blinds as a trio. 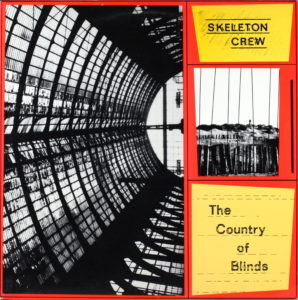 In this video I am mostly referring to the duo version which as I explain was some of the most challenging music I had heard up to that point in my life. It was interesting the progression that I went through with this music, from utter disdain at the live show to complete acceptance upon hearing the album. Learn to Talk is one of my favorite records and it was my doorway to all the radical, experimental music I have listened to since.

It is remarkably difficult to find images of this group performing. I am sure some exist but they are not so easy to find on the internet so I was forced to use images of Fred Frith and Tom Cora individually. The final image is of the trio even though all the music in the video is from the Learn to Talk which was only Frith and Cora. This trio image is however the only "band" photo I found so it had to do.

As I say in the video there is no Spotify playlist this week as none of Skeleton Crew's music is available on that service. It is for this reason that I left a lot of room for the music in this video and as such it is a little longer that some of the others. I didn't want anyone to miss out on this tremendous, adventurous music!