For the Love of Coffee

For the Love of Coffee 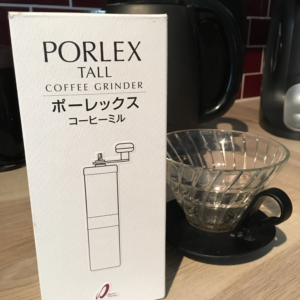 I have been making coffee 1 cup at a time at home for several years. Recently I’ve began using a Hario glass cone dripper made by Hario in Japan. https://www.hario.jp/seihin/productlist.php?bigclass=1

I grind just enough beans for the coffee I’m going to drink that morning which I have always found makes a difference in the taste have the cup. I’ve tried many different coffee making methods such as French press Aeropress, espresso machines of course and in the end I have found after years and years of drinking coffee that I just prefer cone filter drip coffee. I just stepped up my game on a recent trip to the US when I bought a Porlex grinder made by Porlex in Japan. https://www.porlexgrinders.com/pages/about-us. I have friends who have been way ahead of me on this front and I am somewhat embarrassed that it has taken me this long to jump on the hand grinding bandwagon.

I have not done very much research but it is clear that some of the most popular and hip products for coffee making are coming from Japan. Apparently coffee is quite a thing there: http://nationalpost.com/life/food/coffee-is-king-in-japan-experience-one-of-the-worlds-most-fascinating-coffee-cultures. One would think that the popularity of artisan coffee roasting and coffee shops in the United States and Europe would lead to many of these products being produced in the west however it does seem that the stuff to have if you want to be a truly considered an aficionado are made in Japan. There’s something in the precision of Japanese manufacturing that suggests that if you want the details to be just right in your coffee then it’s best to go with the Japanese products.

I have to admit and since I started using my ceramic grinder to grind my coffee beans I have noticed a marked improvement in the taste of the coffee I’m drinking. This may be purely psychological but then again isn’t everything?